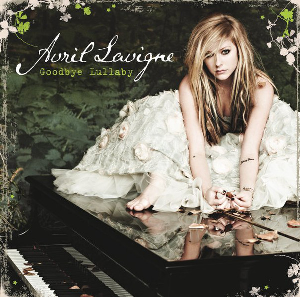 Avril Lavigne’s fourth studio album Goodbye Lullaby is an introspective affair and one which the smart bubblegum pop of her current single What The Hell may not prepare you for.

Girlfriend heralded her last album The Best Damn Thing and that pop gem was followed up in that same go-for-broke spirit on One of those Girls and I Don’t Have to Try but among many other highlights were the more reflective sweeping ballads When I’m Gone and Innocence.

It is in the spirit of those and the glorious I’m With You from her first album Let Go and Don’t Tell Me from her second Under My Skin that Goodbye Lullaby is placed.

From the opening piano keys of Black Star via the plaintive I Love You right through to the closing epic Goodbye she sings her heart, her voice finer than ever.

I understand that her broken-hearted blues springs from her divorce from Sum 41 lead singer Deryck Whibley – Sum 41 have just released a new album ‘Screaming Bloody Murder’ – the other side of the divorce story?!

Goodbye is my favourite lullaby from her collection – so far – spare and sedate with occasional piano and string accompaniment.

Actually the final song on this album is not Goodbye but Alice her contribution to the 2010 Alice in Wonderland film but though a fine song feels an appendix here not quite fitting with the rest of the album.

Another heartfelt collection of songs from Avril Lavigne.