Julianna Margulies plays The Good Wife Alicia Florrick in this CBS commissioned court-room drama and currently aired in the UK on More 4.

But what of its tale of fidelity? Chris Noth as Peter Florrick is her husband – impeached and imprisoned former State’s Attorney and now released looking to rebrand himself to run for this office again – and the impression of fidelity at least is part of that spin.

The Good Wife should really anchor around Alicia Florrick but feels like any other good ensemble cast court-room drama – such as Shark and Silk – Alicia Florrick as The Good Advocate? 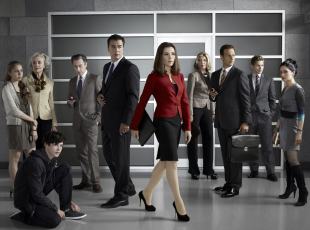 Peter Florrick’s other guiding force is his mother Jackie played by Mary Beth Peil – Alicia The Good Daughter In Law?

Alicia’s daughter Grace played by Mackenzie Vega  is a rebel with a floating cause and met with infinite understanding by her mother – Alicia The Good Mom?

A stellar team at law firm Lockhart/Gardner with its partners Diane Lockhart and Will Gardner, and high-flying staffers Kalinda Sharma and Cary Agos – Alicia a star among other stars – the Good Work Colleague?

But the Good Wife?  This does not feel like a running motif rather an initial hook later forgotten if not abandoned.

The Good Wife is itself written by partners Michelle and Robert King no doubt a good wife and good husband.

Alicia Florrick a good wife certainly, but The Good Wife the series just another Good Courtroom Drama?  If a genre with, excuse the pun, a high bar.