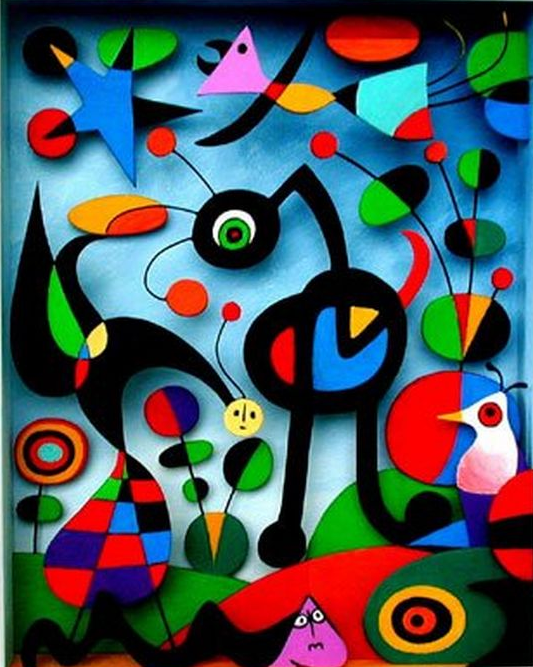 Joan Miró the Spanish Catalan Surrealist has his paintings, sculptures and other works on display at Tate Modern London until September 11 – the first such UK retrospective of his works in nearly half-a-century.

If you are not familiar you can think Surrealism, think fellow Catalan Dali – and related genres such as Fauvism and Magical Realism  of an abstract vein. He also described his work as ‘an assassination of painting’ which may also give you a flavour of what to expect!

Miro began his career as an accountant but the office life was not for him literally giving him a nervous breakdown and so abandoned for life as an artist – such stories films are made of.

He was the first to experiment in ‘automatic drawing’ where the hand paints where it may – the idea to ditch the rational and release the subconscious. I find such works striking but they do not fully engage me – I am not sure if the equivalence of ‘automatic viewing’ is called for and what that might involve!

I feel about these works as I do abstract Jazz – that I am sympathetic with it in principal and feel then that I should like it but that in practice I usually feel ending disappointed.

However I am not one to dismiss a whole genre or body of works and welcome this exhibition as another opportunity to be persuaded or seduced to if not all then some of his works.