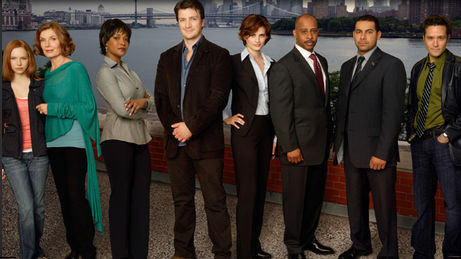 Richard Castle is a crime-fighter who due to a serial-killer copying the plots of his novel is seconded to the New York Police Department Homicide Investigation team – not to police but to research. So crime-writing about a crime-writer – meta crime fiction!

This Investigation team is headed by Detective Kate Beckett, strong and no-nonsense, with some reservations about Castle’s involvement in their work, rather like The Mentalist and Senior Agent Teresa Lisbon of its Criminal Bureau of Investigation and her wariness toward the involvement of Crime Consultant Patrick Jane, who like Castle has an irreverent singular approach to crime detection. Initially the professoinal relationship of Lisbon and Jane was cool before she eventually warms to him. Likely, I think, a similar relationship curve between Castle and Beckett.

This new crime series (commenced 2009) now being broadcast in the United Kingdom on Five and episodes re-shown on Demand 5 is a US based crime drama whose two leads are from Canada.

Castle is played by Nathan Fillon who you may remember as Caleb in Buffy The Vampire Slayer, Adam Logan in Miss Match or more recently as Dr Adam Mayfair in Desperate Housewives.

Kate Beckett is played by Stana Katic. You may have seen her fleetingly in a good number of TV shows – CSI Miami, Heroes, 24, ER and The Shield among others, but this is her first substantial lead role.

Castle is written by Andrew W Marlowe and is a promising premise for a crime series.

In the second episode Castle employs his literary imaginative skills to good effect assisting Beckett and their team in the investigation of a murdered Nanny whose body was found by a neighbour unceremoniously dumped in a laundry-drier in their apartment basement, so setting the scene for ‘Nanny McDead‘.

A tangled web of relationships and motives the episode then weaves. Reality hits Castle when Beckett reminds him that the parents of the Nanny will have to be informed – contrasting the comfort of the authors chair and the distanced messy reality with the police officers who have to deal with it face-to-face daily.

There are no shortage of crime-fighting double acts on our TV screens – our very own Scott and Bailey, the aforementioned Jane and Lisbon in The Mentalist, Gene Hunt and Alex Drake in Ashes to Ashes – these first episodes of series one of Castle shows signs of another sleuthing duo worthy of our viewing-time.