Perfumery is a multi-billion-dollar global industry which Perfume a new series from BBC 4 sets out to explore – witnessing perfumers, scientists, marketers and other industry-insiders as they go about their scented business.

Any series about perfume rather like a 3D film equips its viewer with a pair of matching 3D Glasses should provide its audience with a sniff and scratch card of all the perfumes featured in the series?! Alas this was not the case and we are left reliant on the florid descriptions of the perfume critic whose palette of pongs from the pretty to the putrid is matched and often exceeded by their tight-rope vocabulary used to capture those olfactory sensations – often so profuse they would make a poet blush.

The New and Old Guerlain Guards

In doing so it looked at French perfume-house Guerlain and its outgoing head Jean-Paul Guerlain (the Fourth Generation of the Guerlain family to head the company) whose own son decided not to continue in the family business and so it is being passed to Swiss perfumer Thierry Wasser. Jean-Paul Guerlain close to retirement hastens that with several racist remarks given in a French television interview which, as with another infamous racist outburst from John Galliano, saw him very quickly sacked by his company and which followed street protests showing Guerlain products being set fire too – none of which is good PR for Guerlain!

The program was also notably quiet that the Guerlain House had in fact already been acquired back in 1994 by French Luxury goods makers Louis Vuitton Moet Hennessy going by the easier on the tongue initials LVMH.

The Guerlain section also included a rites of passage moment rather like a Dad taking his son to see his first football match here we witness a Parisian mother taking her twelve year old daughter to a Guerlain store for her first bottle of perfume – and perhaps even more significantly for Guerlain with the business philosophy ‘get them young and get them for life’. A scent called ‘Insolence’ saw this pre-teen likely ‘gotten’.

This second strand of this initial episode saw USA Fashion Designer Tommy Hilfiger putting his name to a perfume LOUD (bottled blue for men and pink for women) – aiming for a younger customer (Gen Y in their words) and aiming to marry perfume with music. Or in their words mixing perfume with the ‘genre of music’! That genre of music which includes Kings of Leon, Mozart and Miles Davis – yeah, that genre! 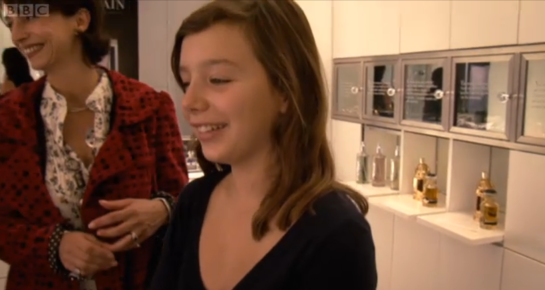 Mother and Daughter rite of passage

More specifically they were aiming to capture the spirit and smell of rock’n’roll (smells like teen spirit seemed an obvious remark yet surprisingly no-one made it!) – the smell of rock’n’roll should not be pleasant – it should be urgh! – it should not be something you want to shell out dollars for an over-packaged box to then smell it in an equally over-ornate bottle!

The person responsible for this sell Veronique Gabai-Pinsky (president of  Estée Lauder designer-fragrance division) eventually sited English band The Ting Tings as capturing the spirit of Loud – I love these Mancunian pop-art sound sculpturists as much as the next boy and girl but rock’n’roll is not an adjective that I foremost associate with them.

The perfume though did seem to go down well with the younger would be customers though one of the UK retail chains promoting it, Debenhams, were a little coy about the volumes sold.

The third strand in this opening series was the perfume critic – the one featured Chandler Burr of the New York Times – and whom it seems spends a good part of his day opening the door of his apartment to a cornucopia of Couriers bearing various sized and shaped perfumed packages. One but wonders the chaotic aroma of his apartment.

While in his apartment we witness him opening some of the packages and testing them out – which involved him dabbing them on to various parts of both his arms – then when there was no more arm-space he went on to his legs – which did resemble a junkie looking for an available vein! And if I must continue with this dark metaphor – and I think I must! – (and indeed Chandler Burr himself refers to it as an addiction and of shooting up and chasing the high) I did wonder rather like an addict with so much inhalative exposure to perfume if his nostril-palette was not well and truly sated no longer able to distinguish creosote from lavender let alone the infinitesimal degrees of smell from perfume to perfume. His sense of smell though clearly remained unjaded with enthusiasm expressed for a number of the scents on all four of his limbs.

I was prepared for the verbose loucheness of the perfume critic having a copy of perhaps its Industry Bible ‘Perfumes – The A-Z Guide‘ by Luca Turin and Tania Sanchez – and indeed I am still expecting an appearance of at least one of Turin or Sanchez in the remaining episodes.

The next episode is ‘Bottling the Memory’ which promising title I await with pleasure this second venture into the often secretive world of the perfumier. And knowing now the critical language of perfume I am expecting at least one reference to a certain literary work by Marcel Proust…