This is a tale about Ann. Ann made a lasting impression upon me. Though she might have been Ann with an e.

This is a tale too about being in love. Or believing that you are anyway.

I felt awkward in her presence so I reasoned that this might be because I was (falling) in love. And naturally what I was feeling for her she was feeling for me.
Naturally.

This is finally then a tale of youthful narcissism.

Ann and I were co-workers. We got on well enough that we arranged to meet outside of our work. Seconds after we had so arranged, our meet had already escalated in my mind to a date and then quickly exploded to so much more. To Ann it was very likely still just a meet.

This first date we had arranged to go to the cinema. I had done my best to dress up presentable, though I fear hair-gel was involved, well it was the eighties. We met up outside a London Underground station of which I cannot remember, any more can I remember the film we went to see. I can though remember, very clearly, how the meet-up, date, romantic assignation began. For walking up the steps from the bowels of this particular Tube station was Ann. And a friend.

The eyes of this friend greeted me with a wary look which read ‘Really Ann, this is your date, you could be doing so much better’. It is amazing what you can read in someone’s eyes from just a fleeting glance.  Except from events that were to transpire she would not have been thinking that at all. It is amazing what you can project upon someone from just a fleeting glance into their eyes.

As I shook the hand of Ann’s friend saying ‘Pleased to meet you’ my eyes were saying ‘You’re not welcome’. It was that ocular message that I hoped would be understood by her. It was, for the rest of this cinema date all words between us were exchanged via Ann.

And as for me and my best laid lines. Now I had to appear at ease and witty with not just one female but two, one of whom at least definitely had no interest in pretending I was interesting.

Worst of it was that I had also bought Ann a gift. A gift based on a  more romantic expectation of this first date than it now transpired she had toward it or me. Luckily for me the gift was concealed in a bag I had taken to carrying around with me at that time.

Lucky too I had not gone down the route of more conventional first date gifts such as not too cheap wine, not too expensive chocolates, Van Morrison album, as they and my intentions towards her would then have been more difficult to conceal.

Instead I went with a book. Oh yes!

I had just finished reading the short-stories of Katherine Mansfield. the collection ‘Bliss and Other Stories’. I could perhaps have lent her my copy, or even made a gift of it by way of a seeming selfless (when actually self-absorbed) gesture, but no, I instead chose to buy her Katherine Mansfield but something obscurer, a Penguin Modern Classics collection of her letters and journals, to prove not just that I was sensitive but erudite too and possibly intellectual.…

The wind set up such a song in my bones that my dear doctor is once more sticking longer, stronger needles into my behind. Although I walk like the only child of a crab and an Indian colonel I feel it is going to do the trick… 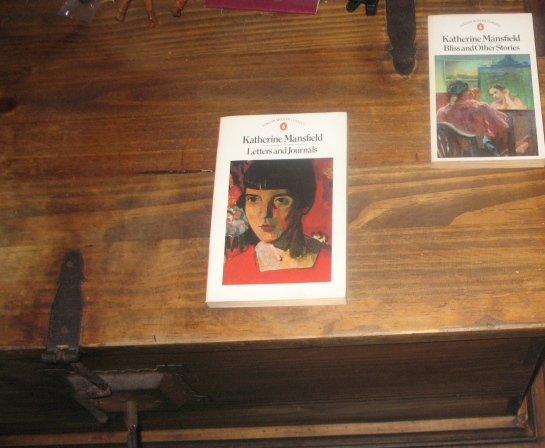 The gift was never proffered. You can see it there in that photograph above. For quite some time afterwards I could not bear to look at that book! But at the same time I was not going to throw it out, I had paid good money for it and one day would read it to its end, its now bitter end.

A second date did occur though and this time it was just the two of us, kind of. We had just finished our work shift and decided to leave together basking in the evening sunshine. Passing a pub we then decided rather than to pass it we should frequent it.

And so there we both were, sat down at a table with our respective drinks at the rescue, and a police-officer enters. Except it soon became evident that she was no police-officer, when she started unbuttoning her blouse. Yes I was on a date and a Stripogram was in the vicinity and I had to pretend to not be a lascivious male, rather a gentleman, an unruffled, composed one at that, above that sort of thing. I think I did this by changing my seat position with my back to the incident.

I did end up back at her place. She did not live alone, well not entirely, she had a land-lady, who we encountered as we entered her home. She gave me the once-over and the judgement of her eyes, again I believed, was not approval.

She took me straight to her bedroom, Ann that is, not the landlady, that really would have been a swift turn of events.

Ann’s bedroom being also her living room. A bed, or rather mattress took up most of the floor space. I was offered coffee and I accepted coffee, no metaphor in sight.

And yet despite clear overtures and remarks that I could stay the night I did not. I did not because it was clear she wanted me to stay because it was late and it was probably easier for me to spend the night at her place. Perhaps even to spite her landlady, she having felt her accusatory judgement too.

But I had been expecting more. The basis for such hopes in retrospect I can see were flimsy but at the time I felt that this was the inevitable order of events in these sorts of situations. I was expecting to, you know, sleep with her not sleep over with her. And if it was the latter on offer then I would have to make my excuses and leave.

A farewell kiss was involved, the sort a brother gives his sister.

After that, unsurprisingly, relations between us became distant. Soon after she left our place of work. She was out of my life, if not yet out of my heart or mind.

Many people when become out of my life if I do later remember them it is often enough to do just that, remember them. Their life subsequently does not preoccupy me.

But I do wonder what became of Ann.

She was engaged so I assume she then became married.  But perhaps he was a cheating cad and they divorced shortly afterwards, she now on her fourth marriage, forever the hopeless hapless romantic pairing off with men not worthy of her.  Well Ann I am sorry, you had your chance, you chose in favour of a good man for an exciting man and well…

Or worse he was already married, he planning bigamy, cursed as he was from loving too much, until Ann was tipped off by a mutual friend and she ditched him before such a legal and romantic crime was consummated on the altar, realising to her horror that she had made a series of wrong decisions culminating in choosing the wrong man. I could have been hers.

And has spent the rest of her life wistfully regretting that night she asked a man to sleep over with her.

Or they have been happy in the state of marriage ever since with two daughters, two sons, two dogs and two cats. The picture of domestic and spiritual contentment.

And not once since as Ann thought of that night or me.