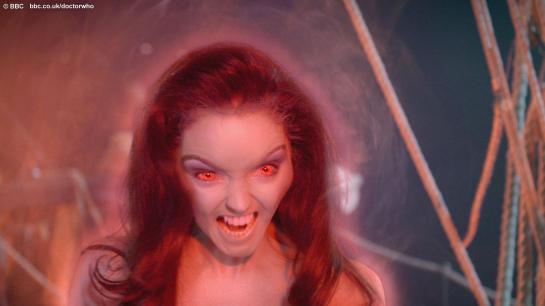 Did you recognise this Sea Siren in the BBC Doctor Who episode The Curse of the Black Spot?

It was Lily Cole and has she ever been made up like this before? She’s a fashion model so perhaps at a Vivienne Westwood show! From Couturier to Costumier she wore it well.

Though – spoiler alert and look away now if you have not yet seen this episode! – it transpires that she is no Sea Siren rather the ships onboard holographic-medic gone awry protecting her crew and captives against injury and disease.

The pirates led by the currently ubiquitous Hugh Bonneville (Downton Abbey, Twenty Twelve) as Captain Avery referred to her as Cursed with the Doctor decrying this as how we describe anyone or thing that is beyond our understanding – to scientific enquiry we must look not defeatist superstitions. Stirring stuff for Saturday tea-time viewing.

Lily Cole’s performance was wordless if not soundless – she had to wail and screech but otherwise look spectral and mysterious, which she carried off, her being a model and all!