Mixed receptions to the Paris Couture shows seemed to be the thing this week. As with Dior the fashion press is divided on Chanel’s Fall 2011 show. Unlike Dior no change at the top still the singular Karl Lagerfeld at the helm. And still those who think he carries the Coco flame. But others who think he has gone off track.

This show was a life of Coco if a Tarantino time-shifted one.

One of the criticisms of the show was that he made these ‘already taller-than-the-average-woman’ models look small – and which I share. This must have been purposeful I guess – Lagerfeld is too much the artist to have so oddly tailored – but then for what purpose?

Most of the outfits were suits and very stylish but they also looked very warm – and what sort of a primary adjective is that for a Chanel show?!

The Chanel work ethic was intact – it was as ever an extensive collection – the House of Chanel clearly toiled long and hard. I loved the materials and the design prints. But not enough to overcome my reservations about the styling and structure of the outfits at least in the first half of the show. 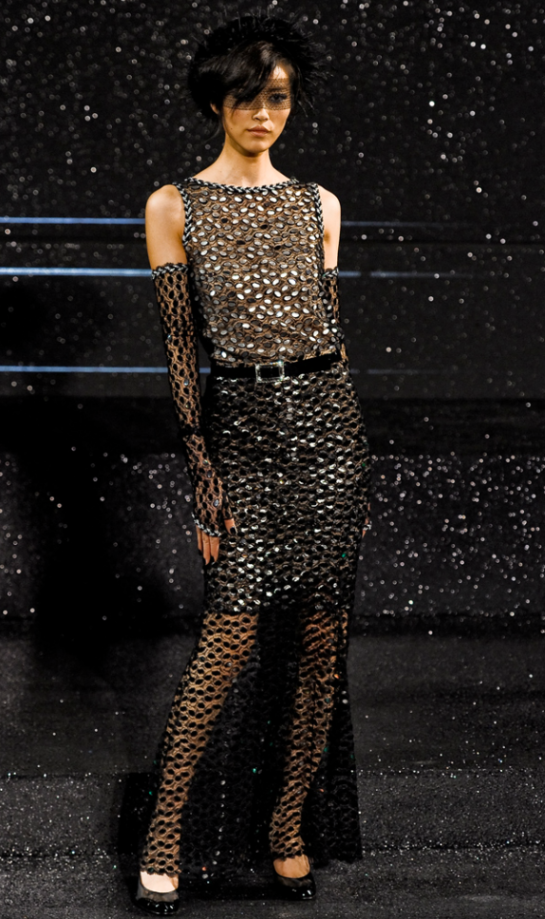 As the show progressed these reservations fell away – the dresses and the longer skirted suits worked unreservedly.

The set was a wow – Place Vendome as rendered by Fritz Lang – but this did not extend enough to the clothes – usually for Chanel shows words fail me – there are not superlatives enough etc – here I was not lost for words.