The 32nd run of Doctor Who began April 23rd with the 771st episode (count them!) The Impossible Astronaut followed by this Day of The Moon episode.  And it was as riveting as most recent series have been with Matt Smith at the helm and Karen Gillan his charismatic companion. This episode was also a fitting and touching memorial to Elisabeth Sladen who died April 19th and who was former Doctor companion Sarah Jane Smith and then latterly star of the spin-off Sarah Jane Adventures. 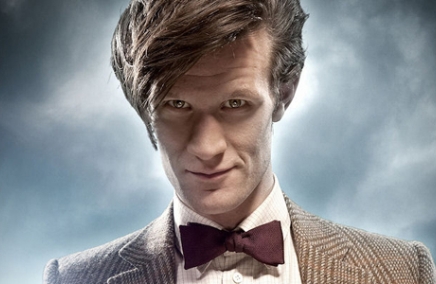 Doctor Who like much of the superhero genre appeals to young and old alike.  For the young there are the special powers and effects, monsters and other villains, costumes and other fantastical elements.  I have nieces that love the new Andrew Davies and Julie Gardner rejuvenation of it, Eccleston, Tennant and now Smith, as much as I did when I was their age in the early 1970’s with Pertwee and Baker at the helm.  And for the old there are the angsty existential themes of mortality and immortality, love and hate, peace and war of which to grapple with. Though in truth if we are young at heart we enjoy as much the special effects and monsters as these weightier themes!

Doctor Who is a bleak story and character.  He is timeless yet all his friends exist in time – they all die, he lives on, ultimately alone. Quite a secular tale too – aliens are eminently plausible but heavenly beings are mere poppycock. Matt Smith captures this existential situation very well.

Matt Smith is the Eleventh Doctor. The Doctor is a space-time traveller. Virginia Woolf’s Orlando did the same upon its Big Bang nearly a century ago in 1928. Orlando went one better than the Doctor though – the Doctor has not yet transformed his male physical anatomy into female form, Orlando did.

I had hoped that the Eleventh Doctor could have made this gender transformation.

Billie Piper would have been a candidate but alas has companion Rose to the Tenth Doctor David Tennant this would be a violation of a televisual scripture if not a temporal rule!

But come on – we Brits belatedly had a female Prime Minister yet still no female Doctor!

For the Twelfth Doctor I am hopeful.  Keeley Hawes would make a fabulous Time Lord. Sarah Parish I could also see the part as a brooding soul lost in time-space. Michelle Ryan had a super-hero role cut short as The Bionic Woman so perhaps the Doctor role would be a perfect reprieve for her. Though I now recall her as The Lady Christina de Souza in the ‘Planet of the Dead’ episode.  But cast aside the televisual scripture! – actors can be recast anew a thousand times at the hands of the casters and broadcasters!

Time for the Doctor to get in touch with his feminine side.