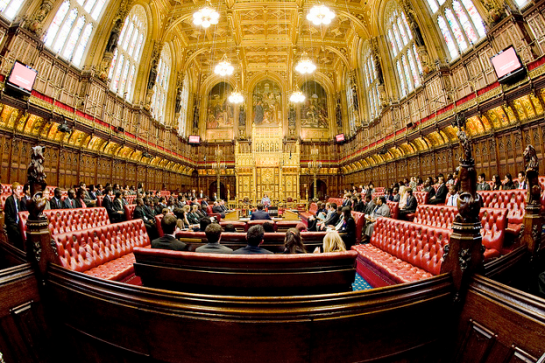 Parliamentary copyright images are reproduced with the permission of Parliament

Currently there is a Lords Reform Bill going through the Houses of Parliament on the behest of Lord Steel of Aikwood, the former leader of the Liberal Democrats.

I have some queasy concerns about bills of a constitutional nature being progressed through the Houses of Parliament – as such bills by their nature will very likely be proposing changes that will effect – often negatively – the status of those existing institutions and members deciding them. Turkeys being very foolish to vote for Christmas syndrome. On the other hand I am not sure what the alternatives might be – certainly not I would think a third house to oversee the current two houses!

Both houses are comprised of members of differing and opposing political parties but few things it seems unite its two biggest protagonists, Conservative and Labour, than proposed changes to the existing parliamentary status quo.

The current Bill I am referring to is a modest one in terms of its ambition – proposing as it does changes to the Membership of the Lords – how Peers are appointed and retired.

But when considering changes to the House of Lords a more pertinent and fundamental question needs to be asked. Namely do we even need a second house, should the House of Lords be abolished? This really would be Turkeys voting for Christmas and explains why it is able to preserve its anachronistic set up and remit against the changing democratic times.

So could we get by with a Unicameral Legislature? Or is a Bicameral model to be preferred, better to check and sometimes restrain Government?

Only if we think the bicameral model is to be preferred should we consider proposals to reform the House of Lords.

And if we do believe we should have a second house we don’t have to re-invent the wheel as many democratic bicameral parliaments exist we could use as a template such as Sweden and New Zealand and indeed the most famous of all across the Atlantic in Washington DC, the American Houses of Congress.

So then do we need a second house? Certainly there is no point of a house that just rubber stamps the legislation of the government of the day or conversely trenchantly opposes and creates legislative gridlock. In both cases making a mockery of democracy.

Is it just another level of governance that could be removed saving the country money in these cash-strapped times? The Conservatives in particular are ideologically wedded to smaller government – is it a bit odd then that they are the main defendants of this second house?

The ultimate check on a government is the electorate. If a Government passes legislation that is unpopular then it is very likely to be voted out at the next election.

Parliament too provides a check – though perhaps more so if there was no Whips in operation – but that is a post for another day!

There is also an issue of how much power resides with a National Government – how much should be devolved downward and how much upwards – and this post is certainly not going to get distracted on the subject of Europe! Often it feels political parties are most interested in transferring powers to those legislatures that most mirror their own political preferences whether they are supranational or local.

But again the subject of where various legislative powers are best seated is a subject for another post.

Likewise the nature of how our Commons is elected. I do think that if we had a system of Proportional Representation such as STV this would better reflect the peoples and not current vested interests, encouraging multiple parties and viewpoints and be less vulnerable to special interest influence. And that in itself may mean that there would then be no need for a second revising house.

However we had that of course proposed via the Alternative Vote referendum which was defeated and it is not likely to re-appear on the constitutional agenda for many more parliamentary terms to come, alas.

Historically we have a bicameral legislature due to wanting to represent different social interests – such as the Commons and Lords! Still centuries later not an antiquated concept with this them-and-us set up still entrenched. Recently established is the Occupy Movement and We Are The 99% – but the 1% have long been with us.

If we are all in this together then there should be but one House? The main class now is the middle class – if hanging on – and do either of our current chambers represent them, let alone the working and non-working class?

The Labour Party used to be their voice but with New Labour and sole ambition to be Tory Lite, no longer.

The USA itself used to have its Houses divided on a social basis – the Senate was unelected and for the Wealthy only, as considered wiser (!), but quickly moved passed this idea to be voted by the people too. Though I am not sure how well represented the American people are nowadays – we have OWS because the American people have to choose between the Extreme Ultra Conservatism of the Republicans and the mere Ultra Conservatism of the Democrats? Both represent the elite, neither the mainstream?

I do though think there is a need for a second house, just not to represent different social interests. Rather to provide checks and balances to the government of the day.

The draft proposals for an elected House of Lords have this as a preference but will accept a 90% elected compromise. My preference is certainly for 100% elected – though I sadly understand the Realpolitik need for a 90% elected compromise too – but election by appointment in a time when Crony Capitalism is so widely described, decried, even derided, if not despised and yet still seeking to justify and promote appointments as an alternative to elective democracy seems almost perverse. The only appointments that should matter are those by the voter themselves?

Another aspect of these proposals is that elections are of fixed terms but longer than those of the Commons (which are currently unfixed but due to become fixed at five years) rather like the US Congress with a 3:1 ratio – only the Senate is voted on every two years and the Representative’s every six years – whereas proposed here are five years for the Commons and fifteen years for the Lords.

This I feel too is pandering to the centuries old ‘for life’ nature of the current system of patronage. On the other hand perhaps a longer term will attract a different type of politician – perhaps more independent of political parties, less concerned with preferment and advancement. It would certainly provide a brake to the Commons where we see not just with the parliamentary landslides of Thatcher and Blair but even with this present coalition and its wafer-thin majority that a Minority Government is still able to streamroll legislation through Parliament often with no indication of it in their manifesto and with no proportionality to the number of the electorate who actually voted for the party – this democratic deficit must be curtailed.

The proposals of longer terms do I think provide a better ground for a more thoughtful and revising second chamber. Allowing if you like the Commons to be responsive (or faddish) to the political times and the Lords to be less concerned of political fashions and more concerned with ensuring a more enduring legislation.

There are other proposals in this bill too relating to the size of the House of Lords and aspects of the Appointments process.

And unfashionable as it may be I do indeed agree with Nick!