In a speech to the nation, well to the Westminster Village hacks, crony-journalist’s finest, he went on.

This is our pledge to you – if we can find a way to privatize something, anything, we will. God Save The Queen, God Save Margaret Thatcher.

The natural progression I am sure you will agree to privatizing the roads is to privatize those – those bits on the sides, that losers sorry non-motorists – pedestrians? – use.

Privatize the pavements. End this era of free-loading strollers.

There will be many benefits of pavement privatization, most importantly, of course, that it will make huge amounts of money for the City hopefully including some of our corporate partners or donors – tomato, tomatho. Perhaps this will not improve our walkways but at least profits will be generated and a lot of them,  and don’t worry it wil be made by a few not the many which is always a good thing, none of that ‘we’re all in it together’ talk. Pure nonsense. Pure socialism!

And this brings us to one of those important and beautiful C words – no not Capitalism not even Conservatism (audience laughs) but of course I talk of Choice.

Some consider the quality of our sidewalks or their mere basic functional directional need to get us from A to B as being most paramount but they would be wrong. What exercises the good people of this country, those who will vote for us anyway, is choice or rather the lack of it. We leave our homes to be confronted with one pavement only. I am sure you share my frustration at this. Well, no longer. With this privatisation a utopia of multiple pavement options awaits us.

Privatization will mean you will have a multitude of pavements passing by your home competing for your business (coughs) use – potato, potahto – it is what you have been dreaming of. I am sure. A future too where the escalator walkway will no longer be the preserve of airport arrivals and departures but will at last come outside and become a feature of our suburban streets and shopping centre cruise-bys. For an extra-levy, naturally.

This government is keen to encourage healthy life-styles and any mileage beyond the first fifty per day will be free.

Further the first fifty yards of walking sorry pavement use will be levy-free. This is nothing to do with us favouring the motorist by allowing those without a garage or driveway to get to their car – rather a concession to our coalition partners who love their thresholds and are determined that no-one using Britain’s pavements should have to pay for the first fifty yards per day. More details will follow in a speech I am to give three days from now. [Privately a leading conservative expressed regret at this concession as ‘more crazy socialism from our Lib Dem partners’ and ‘as soon as we are free to govern alone we will make sure every UK citizen gets charged for every step they make, this is what business and their shareholders want, and as we all know, this is what really matters’]

A pavement! In London!

The Department for Transport when asked about costing advised it was still in talks with the Treasury but that it was up to the market and they predicted it would likely be something innocuous ‘like a penny per step’.

Later in the week the Department for Transport also warned that it has seen websites appearing advocating other forms of bipedal movement to defray the pedestrian-duty (as it was now being called)  such as hopping, skipping and jumping but that this was not the British way and hopping in particular could be very dangerous. What if, for example, some one accidentally hopped off the pavement into oncoming traffic. Think of the poor motorist, not to say their insurer. Oh and the injured hopper. The Department also advised they would take a dim view regarding an explosion of space-hoppers on our pavements adding ‘no one wants to see that sort of thing on Britain’s streets’. And that the government were always minded that any use of the public pavement has to be considered in terms of revenue generation sorry public safety.

In his follow-up speech the PM stood behind his podium and self-importantly shuffled the papers he was reading from and then looked earnestly toward the TV camera’s in his this-is-my-serious-face (just don’t look into my laughing eyes) address-the-nation mode.

Currently there is a casual anarchy on our pavements with pedestrians dangerously navigating on both the left and ride side, and a constant stream of inconsiderate slow moving elderly and dawdling toddlers and other non-motorist los…loiterers without commercial intent I guess you might call them. And they unlike motorists can take to the sidewalks without any training or walking license. The privatization of our pavements will ensure that pedestrians are moving in an orderly fashion and that zig-zagging on a public walk-way will be a thing of the past.

He added they would be looking at introducing a speed limit on the public-walk-ways with penalties for anyone walking too slowly.

The Opposition parities were vehemently against these proposals with Labour describing it as ‘venal and crazy’ and, as they have said about all previous privatizations, a ‘privatization too far’ although they have not said they will reverse it should they get back into power. A spokesman added that they could not possibly make such promises at this time as by the time of the next election it could have established itself as a popular policy with the country. Or at least with the swing-voters in their marginal seats.

The Chancellor of the Exchequer, George Osborne, when pressed if he had ever used a pavement replied ‘that he was sure that he had done’. The Prime Minister was keen to add that he had most certainly done so remembering he had walked on one in London in he thinks 2004 though it might have been 2003 but you could not expect to remember details like that. But, he huffily assured us that he had, explaining that he remembers as he had been accosted, coughs, approached, by a young man selling a copy of the Big Issue, which in passing he added was a wonderful example of entrepreneurship and which had also given him the seeds for his idea of the Great Society now referred to as the Big Society and perhaps yet Big-Ish Society. He also recalled that he did not have any cash on him at the time so sadly he emphasized he could not buy the magazine but did pat the seller on his shoulder and exhorted him ‘to keep it up’ before quickly moving on.

Labour Leader Ed Milliband was quick to take to the pavements and more importantly to ensure a camera-crew was in pursuit and dismissing the whole policy in he hoped a sound-bite that would taste good ‘This is the Government’s doomed Chasing Pavements strategy’. Sky News TV naturally did not hesitate to film Ed on his media-circus walkabout to the strains of Adele. Whilst the Guardian newspaper made a similar jibe about David Cameron’s pavement privatization policy in a barely read column in their Transport section 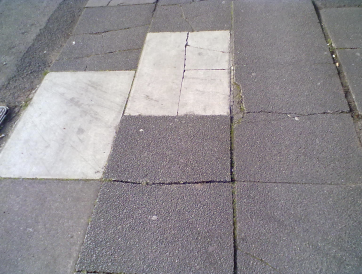 Another pavement! Not in London!

The Prime Minister went on to say that he was very excited about the commercial opportunities for privatizing the walkways (adding perambulation is a privilege not a right) and though they had not got into the detail (at all in fact) options would include pavement tolls, GPS tracking, Pram Cams – whichever was the most efficient to implement, or rather cost-efficient to implement, oh damn it you know what I mean ‘the one that generates the most profit for the private companies running them that I have some hopefully concealed commercial relationship with’.

Related to this a senior member of The Minister of Transport said that his Executive Position and newly acquired shareholding in a number of companies touted as most likely to be awarded the contracts for the running of these projects was of course quite coincidental and had no influence on the government’s commissioning process or desire  to move forward quickly with it.

The PM alluded to the 1966 song ‘Taxman’ saying he sympathized with the Beatles in respect of ‘if you take a walk we will tax your feet’ saying no one wants to have their feet taxed. Having their feet charged an extortionate fee by a private company on the other hand would not have vexed George Harrison at all. Private is good, public is bad and thus a private fleecing is always to be preferred.

The PM beginning to wrap up his speech crowbarred in the new  (he hoped) meme for the pavement privatization – ‘Walk fare is walk fair’.

They were determined he added to get this signed off in parliament in the first half of the session to allow for the privatization of the air-supply in the second half. He then denounced the human-rights-lobby adding that breathing is not a right but a privilege and always more appreciated if hard-earned.

Ends to the Police ‘Every breath you take, every step you make, we’ll be charging you’…